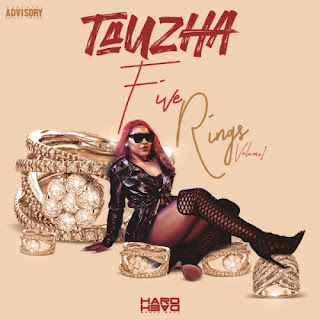 Described in “Respect Magazine” as creating her own lane, Tauzha’s style blends unique vocals and thoughtful lyrics with a confident attitude and personality that represents the true sentiment of Chicago. New to the game but not music, Tauzha has been performing and making music since she was young.
“5 Rings” Volume 1 is the follow up to her debut mixtape “Capone” which received great reviews with features in Hip Hop Weekly, Source Magazine and more. Her new video and titled mixtape “5 Rings” is inspired by Kobe Bryant and winning in every aspect. Directed Gravitii Films, Tauzha displays the story-line of rags to riches from grinding to shining with major appearances by Chicago artist Rico Recklezz, Chella H and The Boy Illinois.
With her 12-song mixtape released on July 11th and after an amazing performance opening for Waka Flocka on a sold out show, Tauzha is truly proving her unique flow to be superior. With 5 songs released as singles, including Blew a Bag featuring Lil Dirk and her hit song, Welcome to the Weekend, you can expect an all-time list of music that will keep the party going.
Listen to her mixtape here: https://mxtpz.me/a/133731
Check out Tauzha's Video for "5 Rings": https://www.youtube.com/watch?v=mZTWoE2OG_I