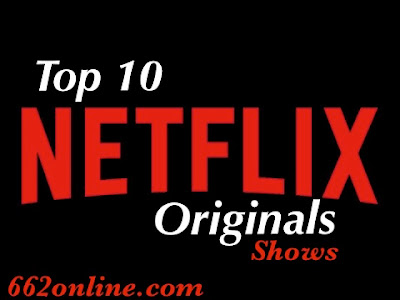 Here is a list of what 662online.com is calling the Top 10 Netflix Original series.

1. Sense8 - (Trippy, Confusing, Interesting, even when I was half way through season 1, I had no clue what was going on, but still wanted to keep watching it. Its the most streamed Netflix Original Series right now, and season 2 was just released)

2. A Series of Unfortunate Events (Doogie Howser aka Neil Patrick Harris stars in this adaptation of Daniel Handler's most beloved books and its catching super heavy streams.)

3. Luke Cage (Now Marvel's Luke Cage, I give this shit a solid 8, but if your a Marvel fan this is a must see regardless. This dude kicks everybody's ass!)

4. BoJack Horseman (Cartoon comedy show with Will Arnet and Aaron Paul as the voices of the main characters. Extremely Funny, Very Popular and Definitely underrated)

5. Jessica  Jones (ok, Marvel was killing me with the slow storyline of this drunk ass P.I who had a nasty punch and can do other cool things but, when it was all said and done, I can say I was satisfied. But I still only give it only a 7.)

6. Gilmore Girls (My daughter watched all of this, this appears to be a Mother/Daughter thing.)

7. DareDevil (Marvel's DareDevil season 2 is the hardest shit you'll ever see, it's a 13 hour action pack movie basically, each episode damn near has a climatic fight scene that you usually only see in the movies. I am throwing the 9 down on DD.)

8. Stranger Things - If you take Goonies and mix it with Poltergeist then subtract Pirates and the old creepy lady you get Stranger Things. This is an instant Netflix classic that took pop culture by storm and this Halloween you will be able to stream all of Season 2.

9. Orange is the New Black - is one of the hottest series on Netflix season after season, and now you can view the Official Trailer for Season 5)


10. Making A Murderer (Super popular show, never watched it, nor do I ever plan on it, "why the F would I watch some show called "Making a Murderer." I have so many other things to do besides that and will forever but tons of people loved it so it makes the #10 spot !)