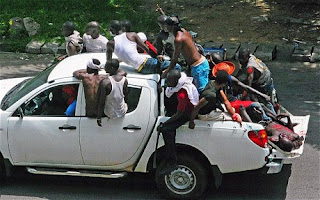 The single biggest atrocity in the long battle for control of Ivory Coast has emerged after aid workers discovered the bodies of up to 1,000 people in the town of Duekoue.

Charity workers who reached Duekoue said it appeared the killings had taken place in a single day, shortly after the town fell to troops loyal to Alassane Ouattara, the man internationally-recognised as having won last year’s presidential election.
The apparent massacre came despite the presence of United Nations troops and - if confirmed - will cast a shadow over Mr Outtara’s assumption of the Ivory Coast’s presidency after a four-month battle to oust Lawrence Gbagbo, the former president who lost the November election but refused to step down.
William Hague, the Foreign Secretary, said he was “gravely concerned” by the violence and loss of life in Ivory Coast and added: “I am determined that all alleged human rights abuses... must be investigated and those responsible held to account.
The International Committee for the Red Cross said its staff discovered more than 800 bodies of people who were clearly local civilians. They were mainly men who had been shot and left where they fell, the organisation said, either alone or in small groups dotted around the town, which lies at the heart of Ivory Coast’s economically crucial cocoa producing region.
Patrick Nicholson, a spokesman for the Catholic charity Caritas, said his team had counted 1,000 bodies, adding that some had been hacked with machetes. The UN said that it already logged 430 killed in Duekoue and was still investigating reports of more dead in the town.

Fighting in the country’s economic capital, Abidjan, appeared to be reaching a bloody climax and there were predictions that the compound occupied by Mr Gbagbo and what remains of his entourage would be overrun within the next 24 hours.
Even though most of Mr Gbagbo’s military chiefs have abandoned him in the past week, allowing Mr Ouattara’s forces to take control of most of the country and lay siege to his powerbase in Abidjan, the 65 year-old strongman remained defiant, with friends saying he would rather die than admit defeat.
Mr Ouattara has instructed that Mr Gbabgo be taken alive if possible, to ensure that is made to answer publicly for his refusal to step down from power, leading to the deaths of 492 people on both sides even before the Duekoue killings.
Kelnor Panglungtshang, a spokesman for ICRC, said its workers were struggling to keep the newly-discovered bodies in a condition to be identified by their families - a task made harder because the town’s mortuary has been looted in the lawlessness left in the wake of the conquering forces.
“Our colleagues on the ground are doing their best but it’s a horrific situation,” he said. “One very experienced colleague says he’s never seen anything like it.”
The charity said it had been told by locals that intercommunal violence erupted soon after Mr Ouattara’s forces took control of the town on Monday. Thousands of people left their homes to escape the fighting and an estimated 40,000 sought refuge in a nearby Roman Catholic mission’s compound. The priests who operate it are running short of food, clean water and medical equipment to treat those they say arrived with gunshot wounds.
The bodies are thought to be of those who did not reach sanctuary in time. They were killed despite 200 United Nations troops operating what it said were “robust” patrols from its base on the outskirts to protect civilians in and around the church.
Hamadoun Toure, the UN spokesman in Ivory Coast, said it had warned both sides fighting in the town that they would be held responsible for any atrocities committed, but said UN troops “were not aware” that civilians were being attacked and killed.
Ivory Coast is the world’s largest cocoa producer and as the gateway to the crop’s heartlands, Duekoue was a strategically vital prize. But there are historic tensions between nationalistic Ivory Coast natives and those descended from people seen as “foreign” settlers, mostly from neighbouring African countries, who originated in the north.
Mr Gbagbo’s support came from the more nationalistic south; but Mr Ouattara, himself the son of immigrants, won 54 per cent of votes cast in an election which was internationally judged to be broadly fair.
Some victims in Duekoue appear to have been killed by mercenaries from nearby Liberia, reported to have been fighting for both Mr Gbagbo and Mr Ouattara.
The Ouattara camp has urgently tried to distance itself from involvement in any of the new deaths. A spokesman said the government “firmly rejects accusations and denies any involvement” in possible abuses. It said it had found mass graves in towns near to Duekoue “whose authors are none other than the loyal forces, mercenaries and militias of Laurent Gbagbo”.
Apollinaire Yapi, an advisor in Mr Ouattara’s camp, said his troops had been warned not to engage in revenge attacks. But he conceded that he could not rule out the possibility of some excesses.
“We have a duty to protect civilians and it is because of that duty that we have taken military action to remove Mr Gbagbo,” he said. “If there are some people among us who are responsible for any breach of the law, they will be punished. We have to investigate exactly what happened.”
Mr Ouattara’s forces continued to attack Mr Gbagbo’s residence and the presidential palace in Abidjan after entering the city on Thursday.
Despite losing the support of military chiefs in recent days, he retains the backing of the Republican Guard and students recruited to the army in recent weekends by his militant youth leader, Charles Ble Goude.
On Friday they seized back the state broadcaster from Mr Ouattara’s forces and today broadcast an appeal for more soldiers to join them for what may prove their final stand.
Heavy gun battles between the two sides has resulted in most of Abidjan’s five million residents being too terrified to leave their homes to replenish their now dwindling supplies of food and fuel. Those who did so last week found themselves threatened and shot at by violent looters.
Henry Gray, a field coordinator for Medecins Sans Frontiers in Abidjan, said one hospital in the city treated 50 people suffering with gunshot wounds on Friday.
He and his colleagues have been trapped in their office. “We had been moving around visiting clinics until a few days ago, but the situation on the streets has deteriorated to such an extent that it’s just become too dangerous to go outside.”
Mr Yapi predicted that Mr Gbagbo would be captured shortly and put the delay down to Mr Ouattara’s insistence that he be taken alive, and for civilian casualties to be kept to a minimum.
“We don’t want to kill the man, he must be tried for all he has done,” he said. “If he dies, he becomes a martyr. Our goal is to capture him alive.”
Guy Labertit, one of Mr Gbagbo’s closest friends and a member of France’s Socialist Party, said he had spoken to him on Thursday and he had made clear he would not leave.
“He will not resign and he will not come out alive,” he said.